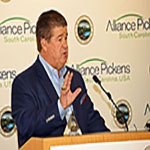 Staff Report
gsanews@scbiznews.com
Published April 28, 2016
Reliable Automatic Sprinkler Co. said it plans to add on to its facility in Liberty.
The New York-based company specializes in manufacturing automatic fire sprinklers and said the new addition includes $23.1 million in new capital investment and will add 100 new jobs at the facility. This is the second expansion of the Pickens County facility since it came to its present location in 2006. They were the first tenants in the Pickens County Commerce Park (pdf).
Kevin Fee, president of Reliable Automatic Sprinkler Co., said the state and Pickens County provided a land grant and tax credits to help make the expansion necessary. The expansion will add 150,000 square feet to the existing campus, making the total facility space at 1470 Smith Grove Road in Liberty, 452,000 square feet.
“The additional land will allow us to expand our facilities and to develop the necessary additional capacity to put Reliable in a position to fulfill its potential in the growth of the fire sprinkler market,” Fee said, in a statement.
The company was founded in 1920 and is headquartered in Elmsford, N.Y. In addition to manufacturing automatic fire sprinklers, Reliable also distributes sprinkler system components. According to the company, it has operations domestically and in England, Germany, Singapore, China, Australia and the United Arab Emirates.
“It is a testament to the partnership between the company and Pickens County that Reliable has chosen to expand its presence here in our community,” said Jennifer Willis, chairwoman of the Pickens County Council, in a statement.
GSA Business Article