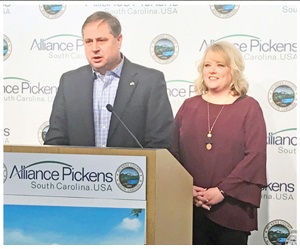 LIBERTY — A business that began in the trunk of a car is
moving to a 52,000-square-foot building as the first tenant in a newly created
multi-county industrial/business park in Easley.
Hal and Angel Rice announced the expansion of leisurewear
company Under the Carolina Moon and its parent company Advertising Authorities
during a joint meeting including Pickens County Council and Easley City Council
members on Thursday evening at the Alliance Pickens office.
“This is an exciting time for us,” Hal Rice said.
Under the Carolina Moon will move from Grace Office Park to
a new location at the intersection of U.S. Highway 123 and S.C. Highway 93 in
Easley.
The new location will allow Under the Carolina Moon to
expand its staff from 25 employees to 40.
“We’re going to grow our production team, our marketing team (and) our sales team inside the store,” Angel Rice said.
Hal Rice said their employees are “the bread and butter for everything we do.”
Advertising Authorities is a corporate branding company, that counts Verizon and iHeartMedia amongst its national clients, Hal Rice said.
The company moved to Grace Office Park in 1999.
Under the Carolina Moon began in 2005 when ” God called us to adopt,” Angel Rice said.
She was a stay-at-home mom with three children.
“We needed a way to fun our adoption,”Angel said. “what started as a six-month process turned into a tow-year process, so the funds were not what they needed to be.”
To help pay for the adoption, the couple created two T-shirt designs as a fundraiser.
“We invested everything we had in those two T-shirts,” Angel Rice said.
The shirt sales were a huge success.
“God provided to the penny what we needed,” Angel  Rice said. “God has blessed us beyond our wildest imagination.”
Through the Rice Bowls ministry, Under the Carolina Moon is able to provide three meals for a child from the proceeds of each T-shirt it sells.
“So far, with the support of the community and everyone around us, we’ve provided 275,000 meals,” Angel Rice said. “Everybody who shops is making a difference.”
Pickens County Council chairman Roy Costner said residents “have a lot to be thankful for.”
“From our workforce development, the career center and schools, our industrial park with world- class leaders in manufacturing and of course the people who live in Pickens County,” he said. “We’re truly becoming your natural destination for business.”
Hal and Angel Rice and Under the Carolina Moon exemplify that, Costner said.
“You’ve taken a homegrown company that continues to grow, adding more and more jobs and investments back into Pickens County, around the people that love you,” he said. “We are very excited to be a part of your success, through a partnership with the city of Easley and Pickens County.”
Easley Mayor Larry Bagwell believes the new industrial/business park will be “a juggernaut.”
“Actually more cars go through that intersection out there than goes over on Woodruff Road (in Greenville),” he said. “You can see what this is going to do.”
Angel Rice agreed.
“We can’t wait to see all the other businesses that are going to be around us,” she said. “We feel like it’s going to really grow.”
Alliance Pickens executive director Ray Farley said “it’s going to be fun to watch what occurs there thanks to your anchoring that redevelopment area,” calling the park “a prime piece of real estate in Easley and a prime location with a heavy traffic count.”
Before officials could get to “the fun stuff,” as Costner put it, both county council and Easley City Council held special called meetings to vote on item related to the expansion and industrial park.
“We’re just the opening act,” Costner told Bagwell and city council members. “You’re the headliner.”
Easley City Council approved an ordinance to include the property in the joint county park, as well as a resolution signing off on an intergovernmental agreement related to the park’s establishment.
County council passed third reading of an ordinance to develop the industrial/business park in conjunction with Oconee County.
Pickens County administrator Gerald Wilson said partnering with Oconee County enables the project to receive tax benefits.
“In order to qualify for the tax incentive, it has to be part of a multi-county park,” he said. “Oconee County works with us on all of our industrial projects.”
That partnership is reciprocal, Wilson said. Pickens County works with Oconee County on its industrial park projects as well, he said.
Thursday’s meetings were “very unique,” county council vice chairman Chris Bowers said.
“We’re not accustomed to running this dual meeting thing,” he said. “It’s very cool. Hopefully it’s the first of many. This is an exciting time.”
The Rices are taking a vacant piece of property in his district and “doing something fabulous with,” Bowers said.
“You’re adding jobs,” he said “I want to say thank you.”