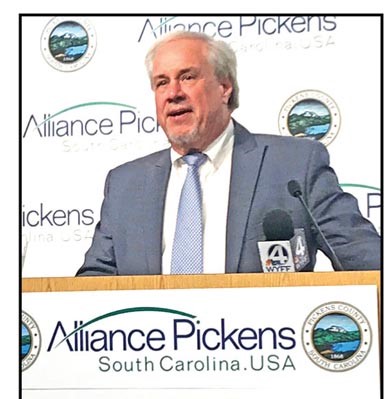 LIBERTY — A Greenville-based waffle and pancake manufacturer is moving its entire operations to Liberty. U.S. Waffle Company’s $22.1 million investment in the former NCR building is expected to create at least 114 new jobs, county officials announced Thursday evening.
“We’re so proud that U.S. Waffle Company is choosing to make Pickens County your new home,” county council chairman Roy Costner said.
Costner said Pickens County hasn’t had “an announcement this big since 2005,” when Reliable Sprinkler announced it was coming to the Pickens County Commerce Park.
He said some county officials had toured the U.S. Waffle plant in Greenville.
“The coolest thing about your company is … all your employees, at all their different stations, were having a great time,” he said. “They were into their job. They loved what they were doing. It’s obvious that you care about the people that you work with.”
U.S. Waffle Company CEO John Symons said consumers see the company’s frozen waffles and pancakes in every supermarket they walk into.
“It doesn’t have our name on it, but we manufacture for almost all the national brand sellers of pancakes and waffles,” he said.
The company’s vision is to be “the highest quality and most efficient producer of specialty pancakes and specialty waffles in the industry,” Symons said.
“What does specialty mean?” he said. “It means we do high-protein. We do gluten free. We do organic. We do paleo. You name it, we do it.”
The company is just more than five years old and has seen an average growth of 63 percent per year, Symons said. The company has two facilities in Greenville County.
“U.S. Waffle has been very, very blessed to be on a tremendous growth curve,” he said.
The company’s pancake line produces 28,800 pancakes per hour. Each waffle line can produce up to 21,600 waffles per hour.”
“We already have another line on order,” Symons said. “We have no place to put it in our current building.”
That led company officials to begin looking for a new location, one as close to the existing facilities as possible, for the benefit of U.S. Waffle’s current employees, Symons said.
“We need that talent to transfer to where our new facility is going to be,” he said.
Company shareholder Bill McLellan introduced Symons to Pickens County administrator Gerald Wilson.
“Pickens County rolled out the red carpet for U.S. Waffle, they really did,” Symons said. “It was absolutely second to none. Gerald is one of the main reasons U.S. Waffle is coming to Pickens County.”
Alliance Pickens executive director Ray Farley immediately suggested the former NCR site, located at the intersection of U.S. highways 123 and 178, to company officials.
Symons and his coworkers originally thought the 310,000-square-foot building was actually too big.
“He’s pretty persistent, let me tell you,” Symons said of Farley.
Negotiations then began with the building’s current landlord, he said.
“I quickly realized I needed an expert to help me with this negotiation,” Symons said.
U.S. Waffle enlisted the help of Vivian Wong, South Carolina’s ambassador to China and a company shareholder.
“She really, really helped,” Symons said. “Any stumbling block I had, because of her knowledge and experience, she overcame it every single time.”
The NCR building has been devoid of manufacturing for nearly two decades, he said.
“It’s a shame to have that building empty for so long,” Symons said. “U.S. Waffle is going to breathe new life into that building. We’re going to make some things happen here.”
Farley said company officials were allowed access to the former NCR site less than a year ago.
“We didn’t have that building long … and Mr. Symons came calling,” he said. “We are extremely grateful to you.”
Rep. Davey Hiott said some companies fit into Pickens County better than others.
“This is one of those companies that fit, hand in glove,” he said. “We thank you for making that decision to come to Pickens County. You won’t regret it.”
The new facility should be operational by October, Symons said.
“What does that mean?” he said. “It means we need to hire some people — a lot of people.”
The new facility will employ at least 350 people.
Symons believes the number of new hires will exceed the 114 new jobs originally projected.
By Jason Evans
Staff Reporter
jevans@thepccourier.com