Scholar Technician Of The Year 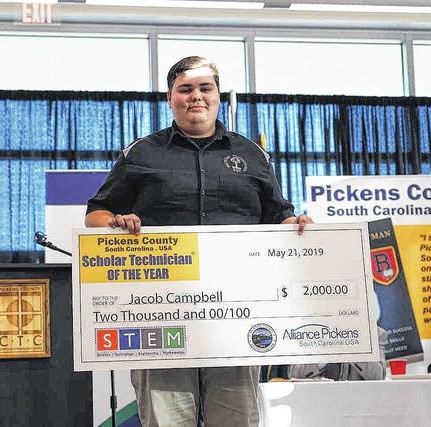 PICKENS COUNTY — Alliance Pickens, in partnership with the School District of Pickens County, announced Jacob Campbell of the Pickens County Career and Technology Center and Pickens High School as the winner of the 2019 Pickens County Scholar Technician of the Year Award.
Sponsored by Alliance Pickens, The Scholar Technician of the Year is an annual award honoring technical competence in Pickens County high school students. This year, the honor comes with a $2,000 “Career Starter Fund” from Pickens County.
The two runners-up for the award, Dylan Shifflet and Branton Huss from Daniel High School, received Career Starter Funds of $1,000 each. The fourth- and fifth- place finalists, Ryan Ivester from Liberty HighSchool and Jarod Barton from Pickens High School, each received Career Starter Funds of $500.
Campbell has excelled in the CNC Programming & Machining program at the Career and Technology Center. He is the back-to-back state champion in the SkillsUSA CNC Technician competition, finishing seventh in the nation as a tenth grader. He currently serves as a teaching assistant at the CTC’s Machine Technology class under instructor Brian Aiken.
This year, he designed and produced a bespoke part for the air conditioning systems at Ambler Elementary School that saved the school district thousands of dollars in energy costs.
“Jacob is one of the best machine tool finalists to ever be reviewed for Scholar Technician of the Year,” said Ray Farley, executive director of Alliance Pickens. “Under the tutelage of Mr. Aiken, Jacob is so high achieving in machine tool technology that Mr. Aiken has entrusted him as a teaching assistant. Students like Jacob and instructors like Mr. Aiken are exactly why Mr. RJ Singh and Mr. Ashley Heaton of IN4.OS US and DMG MORI are contributing a state of the art 5 axis machining center to the Pickens County Career and Technology Center, ensuring that Pickens County students are receiving the highest level of technical manufacturing education. Jacob’s character and work ethic have made Jacob truly stand out. He is a shining example of what employers should hope to find when they expand or locate in Pickens County.”
Alliance Pickens is a public/private economic development organization whose primary mission is to attract, retain and increase the number of jobs and increase the tax base in Pickens County.