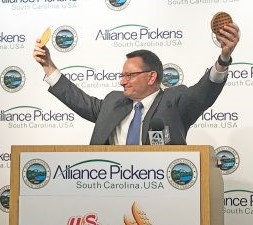 U.S. Waffle Company recently announced a $22.1 million investment, moving into the former NCR building off U.S. Highway 123 in Liberty and expecting to create at least 114 new jobs.
“We’re so proud that U.S. Waffle Company is choosing to make Pickens County your new home,” county council chairman Roy Costner said.
Costner said Pickens County hasn’t had “an announcement this big since 2005,” when Reliable Sprinkler announced it was coming to the Pickens County Commerce Park.
He said some county officials had toured the U.S. Waffle plant in Greenville.
“The coolest thing about your company is … all your employees, at all their different stations, were having a great time,” he said. “They were into their job. They loved what they were doing. It’s obvious that you care about the people that you work with.”
U.S. Waffle Company CEO John Symons said consumers see the company’s frozen waffles and pancakes in every supermarket they walk into.
“It doesn’t have our name on it, but we manufacture for almost all the national brand sellers of pancakes and waffles,” he said.
The company’s vision is to be “the highest quality and most efficient producer of specialty pancakes and specialty waffles in the industry,” Symons said.
“What does specialty mean?” he said. “It means we do high protein. We do gluten free. We do organic. We do paleo. You name it, we do it.”
Symons said the company is a little more than five years old and has seen an average growth of 63 percent per year.
“U.S. Waffle has been very, very blessed to be on a tremendous growth curve,” he said.
The company’s pancake line produces 28,800 pancakes per hour. Each waffle line can produce up to 21,600 waffles per hour.
“We already have another line on order,” Symons said. “We have no place to put it in our current building.”
That led company officials to begin looking for a new location, one as close to the existing facilities as possible, for the sake of current employees, Symons said.
“We need that talent to transfer to where our new facility is going to be,” he said.
Alliance Pickens executive director Ray Farley immediately suggested the former NCR site at the intersection of U.S. 123 and U.S. 178 to company officials.
The new facility should be operational by October, Symons said, and the facility is expected to employ at least 350 people, including the 114 new jobs.