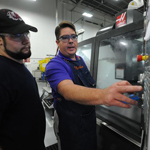 The South Carolina Chamber of Commerce did a study in 2003 to try to find out what kind of workforce development was needed to meet the needs of the state’s business and industry.
It found that midlevel-skill jobs that required some postsecondary training but not a four-year college degree were the most critical need, but there weren’t enough qualified applicants to fill the demand.
The study concluded that a coordinated state program to push apprenticeships should be developed to help get the pipeline of skilled workers flowing.
So in 2007, Apprenticeship Carolina came into being.
The program, which operates under the state Technical College System’s Division of Economic Development, started with 90 companies and 777 apprentices, according to director Brad Neese. In the years since, 10,368 apprentices have been trained for 678 companies, he said.
“One of the things we’ve done really well that really differentiates us from the rest of the country is that we’ve taken this apprenticeship model and, where traditionally you would see only trades like carpentry or electricians as apprentices, we’ve taken that to completely different industries like health care, like IT, like advanced manufacturing, hospitality and tourism, energy,” Neese said.
Priming the pump was a $1,000 tax credit for up to four years per apprentice, available to participating companies.
That offset the costs of sending apprentices to tech college, which is borne by the employers. The apprentices end up with a U.S. Labor Department certification in their field, and the companies get a well-trained, potentially long-term employee.
South Carolina Superintendent of Education Mick Zais made the point that more students should aim for middle level jobs at a recent Rotary Club meeting in Greenville.
Using 2011-12 data from the state Department of Employment and Workforce, he said 16.6 percent of the jobs available that year were for people with at least a bachelor’s degree, while 26 percent of the workforce had that level of education.
“Which is why so many people with college degrees are working in retail, tending bar, waiting tables and serving your coffee in Starbucks,” Zais said.
On the other end of the scale, 42.3 percent of the jobs were for people with a high school diploma or less, and 38.4 percent of workers fell into that category.
The middle ground is where the mismatch is glaring, Zais said.
According to his figures, 41.1 percent of the available jobs were for people with an associate’s degree or technical school certificate, but only 30 percent of the labor market fit into that group.
“These are high-paying jobs,” he said.
“You keep hearing we need more college graduates, we need more college graduates. Wrong.”Apprenticeship Carolina runs counter to the trend nationally.
According to statistics from the U.S. Department of Labor, the number of active apprentices nationally fell from 469,238 in 2002 to 287,750 in 2013. Those figures don’t include the U.S. Military Apprenticeship Program, which has grown from 20,200 apprentices in fiscal year 2008 to 51,001 in the five years since then.
South Carolina’s program has made a big difference in the ability of companies in the state to fill jobs, particularly in skilled manufacturing, according to Carla Whitlock, who coordinates Apprenticeship Carolina programs in the Upstate.
“A lot of these companies are actually going to have key people who are going to be retiring over the next five to seven years,” she said. “Most companies want to fill those positions from their own pipeline.”
One company that has been on board with Apprenticeship Carolina since the beginning is Rexroth Bosch, which manufactures hydraulics for heavy equipment in Fountain Inn.
“We’re really looking for skilled labor like everyone else,” said Mike Bryan, training specialist for the company. “The apprenticeship program has been a big help in filling those jobs.”
The apprenticeship takes two years, or four years for the most highly skilled positions. Apprentice time is split between the classroom, with courses taught by Greenville Technical College, and the workshop, where tech college instructors and company trainers help apprentices hone their skills out on the factory floor.
The company also participates in a junior apprenticeship program with high school students who spend part of their day at the plant. The team has won national awards in robotics competitions.
Some companies dig even deeper into the field to light a spark under future employees.
United Tool and Mold in Easley sends recruiters into middle schools and even elementary schools to spread the word to students — and their parents — about the potential for good paying jobs in advanced manufacturing without a four-year degree.
Even though the demand is high for high-tech machine operators and tool and die makers, not many people were looking in that direction for careers, and the company was facing a big gap in a few years when some of its veteran employees retire, said Jeromy Arnette, production administration manager for the company.
That’s where Apprenticeship Carolina came in, to set up youth and adult apprenticeship programs.
“We knew what they needed to learn, but we didn’t know how to get it set up, we didn’t have the proper training structure here, we couldn’t provide the education resources here,” Arnette said.
“Apprenticeship Carolina gave us the road map we needed.”
It gave a road map to the future to young people like Hunter Gibby, a recent graduate of nearby D.W. Daniel High School, as well.
As he was heading into his senior year of high school, he wasn’t sure what he wanted to do with his life.
“I didn’t know until I went to the (high school) career center, and then luckily I found this, and I was at home,” he said.
Now, he’s spending part of his days at Tri-County Technical College, and part on the factory floor, working alongside a master, just like in the apprenticeships of the old European model.
“I’ve learned almost everything there is to learn about molds,” he said.
He has also learned that he fits a mold that will provide a good living, doing the kind of work that he loves.